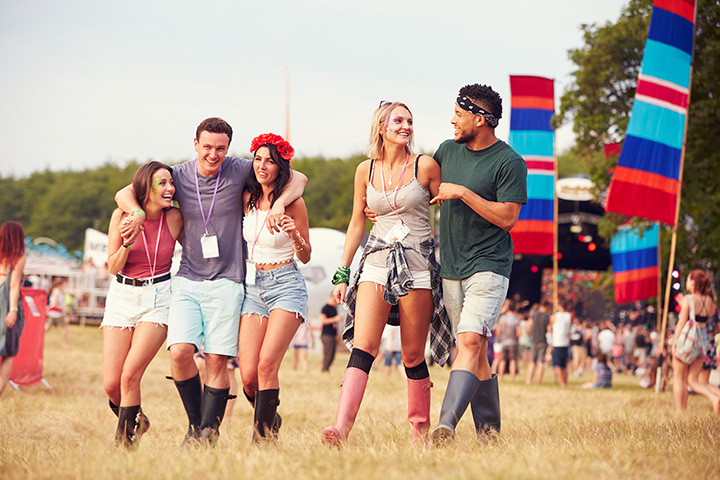 From North to South, California has inspired songs and been the stomping grounds for legendary music for eons. Given its deep musical roots, it’s no wonder that California is also home to some of the most famous music venues in the country, if not the world. Check out where you can see everything from major rock shows to small local groups at the numerous music venues throughout the Golden State.

Once upon a time, the California’s Inland Empire was home to a polo field. Since then, the polo field features not only polo games but some of the world’s largest and most famous music festivals, including the annual Coachella event that draws big names, small names, celebrities and music lovers from all over the world to inspire entire fashion collections.

Golden Gate Park is one of California’s oldest and most legendary outdoor music venues. Golden Gate Park hosts a variety of music festivals throughout the year, from local talents looking for their big break, to long-established bands. Music lovers chill out on the wide green spaces to enjoy nature in the midst of the bustling city. Types of music range from country and bluegrass to rock n’ roll and more.

The Hollywood Bowl is a summertime tradition. The dome shaped bowl attracts locals and tourists to the unique old-school dome that showcases some of the world’s greatest talents. Each summer season features a variety of tunes from past and present. The tiered seating and pricing levels means that everyone from poor college kids to elite law firms can enjoy the music venue. It’s a tradition to bring your own picnic before the show, although the Hollywood Bowl also offers restaurants and snack bars on the premises.

The Troubadour is one of the many small legendary clubs that can be found in Hollywood. Since 1957 it has launched the careers of timeless acts ranging from Bob Dylan to comedians as well as been a smaller stage for already known acts like Johnny Cash. Everyone from the White Stripes to local bands play at the small music venue and shows attract celebrities like Beyonce. The Troubadour continues to host amazing acts and is one of the top places for bands to want to play.

Known to locals as The Greek Theatre, Berkley’s Hearst Greek Theatre is an outdoor music venue constructed in the model of ancient Greek amphitheaters. The venue hosts Berkley events as well as top musical festivals, huge music acts and more events throughout the year. The venue supports all types of music from classical to pop and dates to the early days of the California University’s campus.

The Balboa Theatre dates to 1924 and was mainly used to show cinema for many years. After closing for a couple of decades, the theater has been renovated and updated to showcase a variety of performing arts. The new theater shows classic films along with a range of musical acts and performances.

The Great American Music Hall regularly appears on lists of the country’s best clubs and has the prestige of being the oldest nightclub in San Francisco. Balconies, columns and elaborate artwork harkens back to days of yore while the musical acts and events are strictly modern day. The space fell into a decline for a period of time before reopening in 1972 to the sounds of Jazz like Duke Ellington and Count Bassie to more recent acts like the Lumineers.

Walt Disney Concert Hall is the home of the Los Angeles Philharmonic Orchestra. Designed by world-famous architect Frank Gehry, it is acoustically and visually stunning. It is considered one of the best modern music venues in terms of acoustics and gives tours for visitors to learn more about the architectural features and other facts. The donation of Walt Disney’s daughter, the L.A. Philharmonic gives regular concerts throughout the year, as well as other world-renowned bands, performers and special events.

Located in Griffith Park, The Greek Theatre has hosted legendary acts ranging from Sir Elton John to Frank Sinatra. The first musical performances at the Greek Theater date back to 1930 and were mostly operatic. More recent history has showcased the venue as a favorite for community events as well as continuing to fill the stadium with fans of rock music. As part of a public park system, The Greek Theatre is undergoing a renovation in order to better serve the music-loving world.

The Fillmore first opened as a dance hall back in 1910 and since then has weathered the ever-changing music scene. From hosting James Brown, Bobby ‘Blue’ Bland and Ike & Tina Turner to the counterculture movements of the 1960s, The Fillmore has continued to be a leading music venue in San Francisco. Smashing Pumpkins, Gin Blossoms, The Grateful Dead and more have all appeared at The Fillmore, which has hosted Tom Petty and the Heartbreakers over 27 times. The shows are endless and the crowd shows its appreciation by showing up time after time.

The Mayan is one of L.A.’s famous former movie palaces that dates to the 1920s. The elaborate façade and details showcase Mayan Revival, one of the Revival architectural styles popular at the time. Since its construction, The Mayan has showcased movies as well as been featured in them. It frequently shows smaller bands and musicians in between regular lucha libre events and is the perfect place to check out the cool kids that have recently moved into downtown.

Crypto.com Arena (formerly The Staples Center) isn’t just the home of four professional sports teams, it’s also a music venue for some of the biggest names in music. The Red Hot Chili Peppers, Faith Hill, and other stars that have included Taylor Swift, The Rolling Stones, Prince, U2, Garth Brooks, Paul McCartney, Jay-Z, Roger Waters, Britney Spears, Beyoncé, Justin Bieber, Katy Perry, Sade, Justin Timberlake and more perform for some of the most highly sought after tickets in town. Surrounded by more dining and entertainment options in the heart of downtown L.A., Crypto.com Arena is a major music going experience.

The all ages venue tends to be one of the first music venues that Southern Californians hit up once they learn to drive. From touring bands to showcasing local artists, The Glass House is one of the best music venues for locals in the know seeking something bigger than the small clubs of Hollywood but something more intimate than famously large venues that populate the city.