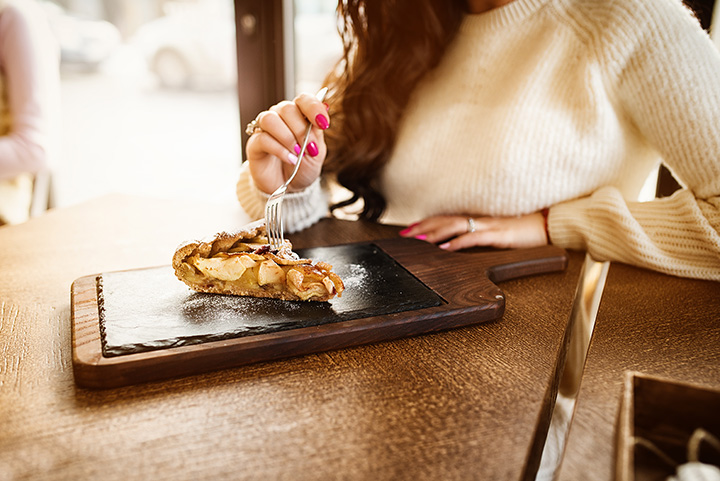 Apples aren’t native to the state, but that didn’t stop the baker behind this bakery from making them a star in her pies. Apples, from her orchard, wrapped up in a flaky pastry crust, come in a variety of combinations. The traditional straight-up apple is a favorite, but don’t miss the caramel Dutch apple or the apple mountain berry crumb. Take home a few apple memories too, pie crust cookies dusted with cinnamon.

One hundred and fifty acres of apples supply the farmer-sized portions of pie at this apple-rich destination. The “Mile High Apple Pie” has two pounds of hand-selected apples, tossed in cinnamon and sugar and topped with a buttery crust. The traditional apple pie is phenomenal, but for something a little more off-beat try the sour cream apple berry.

This landmark diner in West Los Angeles has been serving daily, fresh-made apple pie since the doors first opened in 1947. Eating here is an exercise in patience. With only 26 counter seats, you wait for someone to leave before sitting down to eat. The pie is a classic, the product of a longstanding family recipe. Served by the slice with either ice cream or whipped cream. Cash only.

The all organic apples used in the classic apple pie are locally-sourced, as are the butter, eggs, cream and milk, flour, sugar and everything else. Tart Pippin apples are the star, but the hand-mixed spices and a fresh squeeze of lemon juice accentuates the flavor. A rolled, woven, and fluted-by-hand lattice top moves this pie into the realm of “it looks too good to eat,” but don’t let that stop you. Order online.

The “land of promise for apple growers” brought farmers to the area in the early 1900s, and many of the orchards are still in production today. You’ll find some interesting varieties of apples—Bisby, Paragon Winesap, King David, Rome Beauties—many of which are used in the baked goods. Apple pie includes a traditional style, Dutch apple and a Mile-High Version, chockfull of delicious tart apples. Take-and-bake frozen pies available.

There’s a reason this diner has been voted the number one place for dessert multiple years running … it’s the cakes, cheesecakes, tortes, tarts, pies, cookies, pastries and decedent chocolate desserts, of course. Everything is made fresh daily including three different types of apple pie: a simple one with a double butter crust, old-fashioned with piles of fresh apples tossed in spices and a splash of brandy topped by a honey, brown sugar crumb crust, and an apple praline pie that elevates the old-fashioned with the addition of a nut praline mix. Drop a quarter in the juke box for a fun evening at this authentic 1950s style diner.

This apple pie at this destination farm is so popular that it’s advisable to call ahead a reserve a slice or a whole one, or there just might not be any on-hand when you get there. The farm’s orchards have close to 100 varieties of apples, many of which are used the bakery treats. The apple pie, either three or five pounds, is huge, with cinnamon and brown sugar dusted apples, a splash of lemon and baked to golden-brown perfection in a tender crust. Talk on the street is the Crumb Crust Apple Pie is a winning combination.

Pie and ice cream. You can’t beat that combination. The house-baked heritage pies served here are entirely handmade, baked fresh every single day and free of preservatives or artificial flavors. Pie flavors follow the season, so in fall and winter it’s apple time. The Dutch Apple Pie is a fusion of spiced apples, a heritage crust and streusel toppings. Of course, you must get a scoop of the handcrafted vanilla bean ice cream to go with it.

Be spontaneous! This bakery has a walk-up pie window where you can get a slice, a mini or a whole pie. If you want to sit a bit, you can order at the counter and spend some time in the small cafe space. The Spiced Apple is a blend of spiced Granny Smith apples, topped with a cardamom-oat crumble, nestled in a thin, crispy all-butter crust. Fresh, local, organic ingredients used in every pie.

This town is in the heart of apple country and has been since the early 1900s. This ranch is still family-owned, now run by fourth generation family members. You can pick-your-own apples in the orchards and make your own pie, or you can sit awhile in their outdoor gardens over a slice. Choose from a straightforward apple or a simple Dutch apple or get the best of both of their worlds with apple raspberry, apple olallieberry or double berry Dutch apple.