The 8 Best Places for BIG Food in California! 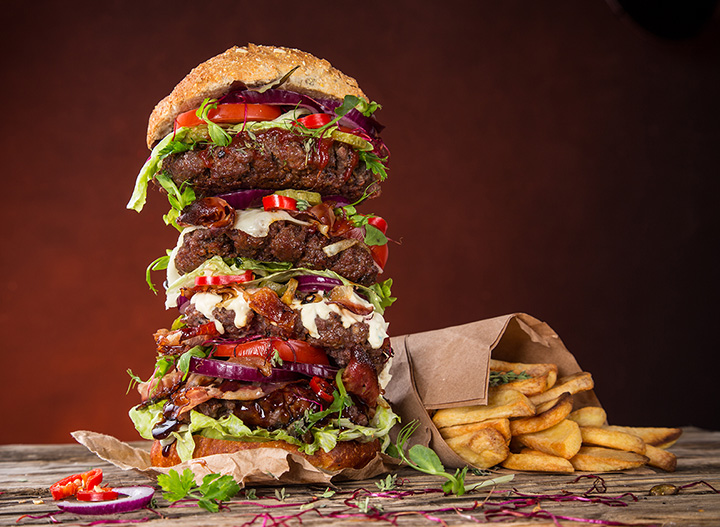 People forget that California is a BIG state and thus offers BIG food. Whether you’re up for a “Man v. Food”-style challenge, looking to start your career as a competitive eater, or simply want to show off to your friends, you can find a restaurant serving up some big foods just for you. Check out a few of the spots in California that are famous for offering a supersized version of a classic—and a stomach ache—should you complete it.

Taqueria Yarelis has a big reputation for its “Anaconda” burrito. Weighing in at five pounds and three feet-long, the monster is reportedly more than enough for five people to share. At $23, it sounds pricey, but with five tortillas and plenty of leftovers, it’s actually quite a deal for a crowd of hungry eaters.

Angelenos love their ramen and Orochon Ramen remains one of the most popular, thanks in part to those looking to add their faces to the wall of fame. If you can conquer a bowl of two pounds of super spicy ramen in under 30 minutes, you’ll find yourself on the wall. And probably in a lot of pain as well. For the meeker, you can also get your ramen non-spicy, but there’s no challenge in the bowl.

LKSD is serious about meat. And drinks. But mostly meat. Which is why the restaurant has gained a reputation for its extra impressive tomahawk steak, weighing in at 40 ounces. The burgers at LKSD are also massive, featuring double patties and lots of toppings.

@lksdkitchen And then you hear the sizzle and you realize you just want to go Big • Celebrate with loved ones tonight @lksdkitchen • ðŸ“¸: @drinkeatsocial

The Broken Yolk Café now has locations throughout California and several other states, but it originated in a small San Diego town. Contributing to the BYC’s popularity was its BYC Challenge, featured on television. The challenge is eating a dozen-egg omelet, smothered in chili and cheese, mushrooms and onions as well as biscuits and home fries, all by yourself, in under an hour. If you manage to win, you get a free meal, a free T-shirt and a place on the wall of fame.

Fair Oaks Pharmacy is a landmark old-school soda fountain that packs a generous portion into the entire menu. Go beyond the pint of ice cream found in the shakes and malts and head straight for the Kitchen Sink. The supersized sundae feeds at least four people with your choice of eight scoops of ice cream, toppings, and bananas and brownie bites.

Big Mama’s and Papa’s is a pizza chain originated in the greater Los Angeles area that takes pride in offering the biggest pizza available via delivery. At the Burbank, Eagle Rock, and Northridge locations, you can take on the Giant Sicilian challenge, which allows seven people to try and chow down on 50 pounds of pizza in two hours. Not only do you get a free meal if you can conquer the 54-by-54-inch square monster, there is also a cash prize involved.

If you really love sushi, then you might be up for the Monster Roll, the signature sushi creation at San Diego’s Deli Sushi & Desserts. The Monster Roll Challenge is the equivalent of eight regular-sized rolls and requires you to eat it all in just 15 minutes. If you’re not up for the challenge of a timed meal, you can also opt to make any roll on the menu “Monster” sized. If you complete the challenge, your meal is free. If you don’t, your photo goes on the Wall of Shame.

Tucked away on Highway 96, the small café makes really big pancakes. Pancakes are around 13 inches each, making one a full meal. But if you’re up for the famous Seiad Pancake Challenge, prepare to eat no less than five pancakes, stacking up to seven inches and over eight pounds of pancakes. You have two hours to do it, and are rewarded with a free meal.

The pancake challenge in the last town before we hike into Oregon. 5 lbs of pancakes