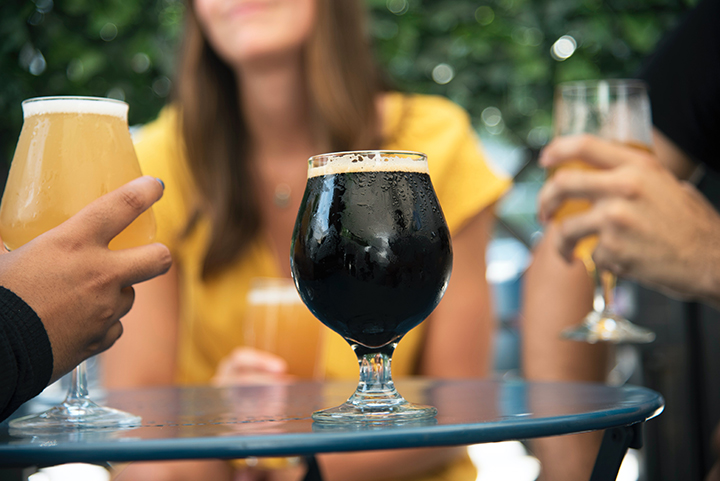 The best part about a beer garden isn't the beer. It's hanging with friends, sharing a meal, and enjoying being outside in a festive environment. Well, and drinking beer. Beer gardens are the perfect open-air setting to unwind, maybe listen to some music, and eat a pretzel.

Once known for its chicken population, Petaluma has reframed itself into a vibrant community and tourist destination. This eatery, located in the redeveloped historic Downtown, boasts about 30 craft beers on draft and a spectacular outdoor seating area overlooking the Petaluma River. Food with a Southern Carolina BBQ flair pairs well with the selection of beers, wine, and spirits. In true California style, it's laid back, kid-friendly, and dog welcoming.

The beer types served here are a mix of 24 craft beers on tap, including light, amber, hoppy, sour, Belgian, porter, and stout. Throw in a pizza with any one of these, add in an open-air patio beer garden and a warm Pacific Ocean breeze, and you have the recipe for just a great time. Enjoy the vibe of downtown Ventura, blocks away from the Ventura pier. Not a beer drinker? Try one of the house-crafted cocktails or a glass of vino.

With more than 30 craft and import beers on draft, it might be hard to decide what to try. No problem, order a flight and get a taste of four different types, emphasizing local beers. Stein Beer Garden is a great place to meet up with friends. The environment is festive and fun, comfortable and relaxed. The made-from-scratch grub is imaginative, blending modern takes on American classics. If you find a beer you like, take a growler home.

Beer gardens are a German innovation. This one captures the spirit of this inventiveness by having more than 35 German and Belgian beers on tap, a menu with a range of German favorites from schnitzel to sausages to Bavarian pretzels to their distinctive apple strudel. So choose a stein of any size, grab a seat outside, listen to some oompah music. After a while, you might even see a true rasselbock… a mythical Bavarian creature that's a mix of jackrabbit and antelope.

There are two locations of this award-winning independent craft brewery. At this location, the beer garden overlooks the brewhouse where, occasionally, you can see the brewers in action. The specialty is German-style beers — it makes sense at a beer garden. You'll find lagers, as well as sours and stouts, ales, and IPAs. Get a growler, sealed and more accessible and safer transport, a 1/2 barrel keg, or a four-pack of any and enjoy at home. The owners are from a long line of brewers, dating back about 150 years. This is a place that knows how to brew.

Out of Bounds Craft Kitchen and Biergarten, Folsom, CA

Passion, innovation, and quality are the three tenets of success for this award-winning brewery. The craft beers are innovative but not pretentious. It's just good beer. On average, about 20 beers are on tap, the standard IPA, lagers, pilsners, stouts, and sours. So try something a little different and order 12 four-ounce pours from the tasting wheel. And do not pass up the pretzilla with a beer mustard and bacon jalapeño dip. That beer is a meal in itself.

This part of northern California is Bigfoot country. Yes, the elusive giant Sasquatch, but also a 4,000 square foot taproom and beer garden that calls itself the "missing link between man and bear." The 30-plus taps represent both local and regional beers. The open-air outdoor area is comfortable, just right for kicking back with friends or family. Unfortunately, there's no on-site food yet, but bring your own or get something delivered.

First time here, and you're not sure what to order, don't be shy; ask for a taste of something. You'll get just enough to wet your whistle and pick a favorite from the dozens of local craft beers on tap. Located in a renovated grain warehouse with a large patio in the city's downtown area, the atmosphere mingles urban and outdoors. A mix of food trucks parked nearby provides an eclectic mix of foods. Live music and art show events happen monthly. For the adventurous, don't miss the beer slushy.

Hmmm, house-made chili dusted pork rinds and a Golden Trout Kolsch-style beer. There's a mouthful, literally. Opened in 1996 as the first craft brewery in the state's Eastern Sierra mountain range, you'll find a full range of microbrews crafted with local ingredients, a menu that pairs well with an ale, IPA, pilsner, or any one of their season specialties. Not sure what to choose, be adventurous and get a flight … seven, two-ounce pours.